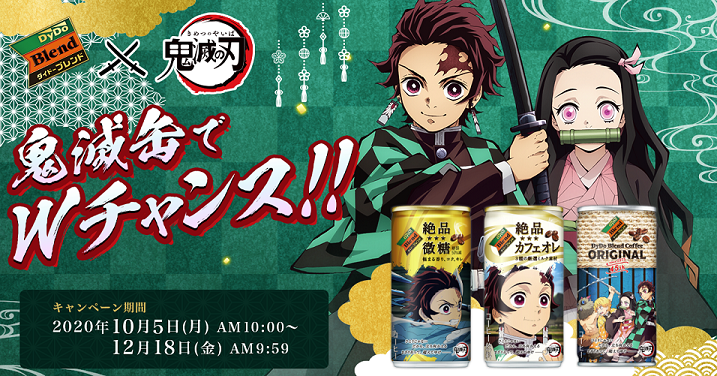 The “Original” version will feature 12 different can designs, from the series protagonist Tanjiro Kamado through to Zenitsu’s Kasugai Crow, “Chuntaro” and the series main villain, Kibutsuji Muzan.

The “Cafe au Lait” version sees some fan favorites feature on the cans. Tanjiro’s sister, Nezuko Kamado, makes an appearances as well as popular members of the Pillars, the Love Pillar Mitsuri Kanroji and the Insect Pillar Shinobu Kocho.

An exclusive set of cans limited to Japanese vending machines is also available, which sees more members of the Pillars such as the Flame Pillar, Rengoku Kyojurou, Wind Pillar, Sanemi Shinazugawa and Serpent Pillar, Iguro Obanai.

A limited quantity of full sets of each of the “Original” and “Cafe au Lait” coffee can now be pre-ordered for delivery in January 2021 from Dekai Anime while stocks last.