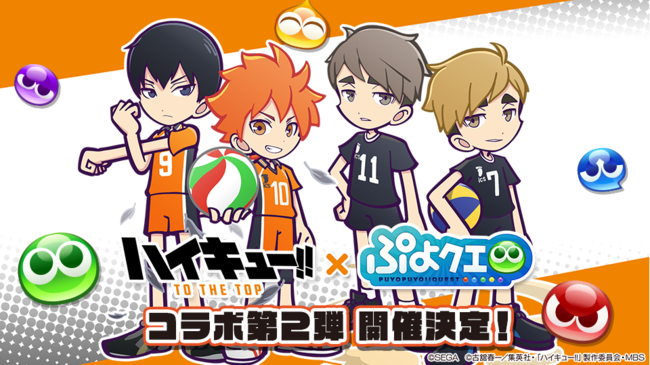 Puyo Puyo Quest is adding more characters from Haikyuu!! Returning characters include Karasuno players Hinata and Kageyama as well as some new additions from the Inarizaki High School volleyball team!

Puyo Puyo Quest is a Japanese smartphone game that mixes the classic puzzle gameplay of Puyo Puyo Pop with RPG based elements. Puyo Puyo Quest has previously featured time-limited Haikyuu!! content and the boys from Haikyuu!! are returning to the game alongside some new characters from the latest series!

Members of Inarizaki High School, including the Miya twins, will be added to the game shortly, with 3 more characters still to be announced.

The new Haikyuu event sees time-limited stories and events accessible in-game based on the latest season of the anime. These stories will be accompanied by new voice recordings from the cast of Haikyuu!!

To celebrate the new Haikyuu!! collaboration, the cast and staff members of Puyo Puyo Quest will be hosting a special livestream broadcast on YouTube, NicoNico and Persicope. The Haikyu !! Collaboration Special will be broadcast at 8pm JST on November 7th and can be viewed using the following links:

Puyo Puyo Quest can be downloaded on both Android and iOS.