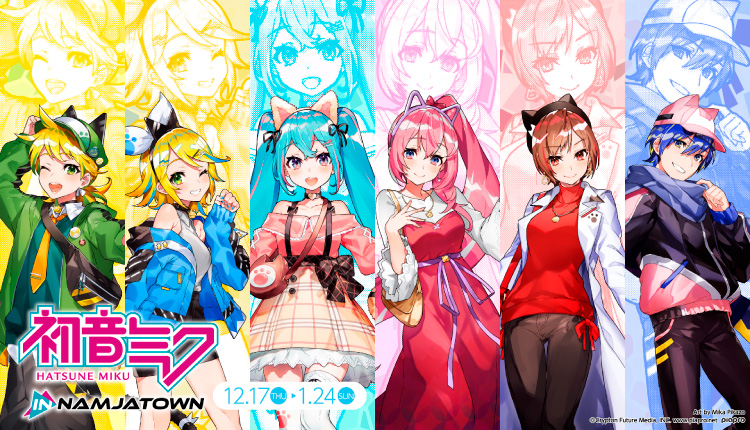 The collaboration has been themed around the concept of going on a date with Hatsune Miku! As part of this theme, Namjatown has commissioned illustrations from the artist Mika Pikazo showing Hatsune Miku, Kagamine Rin, Kagamine Len, Kagamine Luka, MEIKO, and KAITO dressed in fashionable clothes as if they are ready for a date. Their clothing is cat-themed, taking inspiration from Namajatowns feline mascots.

In addition, the music video of the original song “Otome + Ai no Susume / Sugishita Tokiya feat. Hatsune Miku” is being released today (November 26th) as part of Namjatowns celebration of the collaboration. This new song has been produced by Tokiya Sugishita, who has previously produced the popular songs “Setsuna Trip” and “After School Stride” as part of the production unit “Last Note”. The music video will be played on screens inside Namjatown and many of the illustrations produced for it, by established illustrator Ryusei, will also be used for some of the prizes and original goods available for sale.

Prizes will be available for Miku fans who take a chance on the “Nyanyanyanyanyanyanyanya” lottery game. Depending on the result of the lottery, they will receive a prize from a selection of acrylic stands, badges and shikishi art prints!

A variety of “Hatsune Miku” and Vocaloid related merchandise will also be available on sale at Namjatown.

Namjatown will also be making meals and desserts available based on Hatsune Miku and her Vocaloid friends. Visitors will be able to try food including Miku’s Meow Meow Mint Milk, MEIKO’s bright red dumplings and Len’s Chinese lunch box!

If you can’t make it to Namjatown, then the single “Otome + Ai no Susume / Sugishita Tokiya feat. Hatsune Miku” is now available to watch on YouTube!