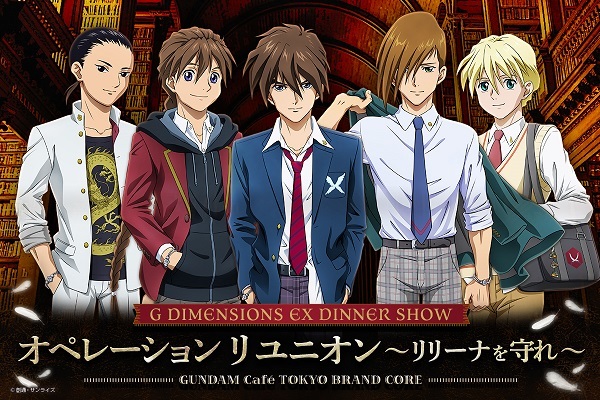 The “G DIMENSIONS EX DINNER SHOW” held at the GUNDAM Cafe location in Tokyo’s Akihabara area is expanding its line up by adding a all new Gundam Wing themed show!

G DIMENSIONS EX DINNER SHOW is a 90-minute dinner show which features several different shows based on popular series that are part of the long running Gundam franchise. Each show involves characters appearing on screen and talking to the visitors while they are served a menu that has been “created” by the characters. Each show is guided by an actor playing a clerk or navigator whose job it is to involve the customers in the story.

The story of the new Gundam Wing show involves a “peacekeeping party” hosted by Relena that has been infiltrated by assassins!

This new Gundam Wing story has been created under the supervision of Katsuyuki Sumisawa who was in charge of the majority of the series composition of the original anime series.

The story branches into two distinct routes with one focusing on a team led by Heero & Wufei with the other toure focusing on Duo and Trowa.

The menu includes a choice of 1 of 2 main courses and features a variety of drinks and appetizers.

A variety of drinks will also be available as well as exclusive merchandise including acrylic charms and stands.